Within the Cal Poly San Luis Obispo area, often it is known for its less-diversified campus, however in uncovering more on style within the area I came to interview Australian native Rohan Moorjani.

In his travels, Rohan has grown up in Dublinin the Northern California area. While the majority of his family is from India, and few relatives remain there, Rohan annually makes trips out to Melbourne to stick to his roots.

Rohan’s style is not particularly eclectic to any region either, rather a blend of different fashions from different hearths. Rohan’s father, Paran, was a model for some time for business casual attire in India prior his career in business consulting currently.

Creativity is essential in best representing oneself in an outfit. Rohan’s recommended brand of interest is Absurd. The New York label gives a garage-feel of what Vans may have incorporated in the 90s, at one point releasing a screen print for avid fans to make their own merch.

Bailey Snow, a journalism major fourth year student comments on fashion on the Central Coast, “Background fuels style, and in a way the more connected you are to your culture the more inspirational it becomes to embody that heritage.” Bailey’s family is half Indian, and it can be reflected in his attributes to outfit design.

His roommate, the San Diego native Matthew Wirick reminisces his grade school diversity in comparison to attending Cal Poly. “It flushes individuality down the toilet, not embracing who you are. Some days it feels as if Cal Poly is a living echo chamber.”

It takes a humble individual and an imaginative personality to harness these qualities and to reject the plain. Check out the embedded video for an inside scoop interview with Rohan Moorjani. 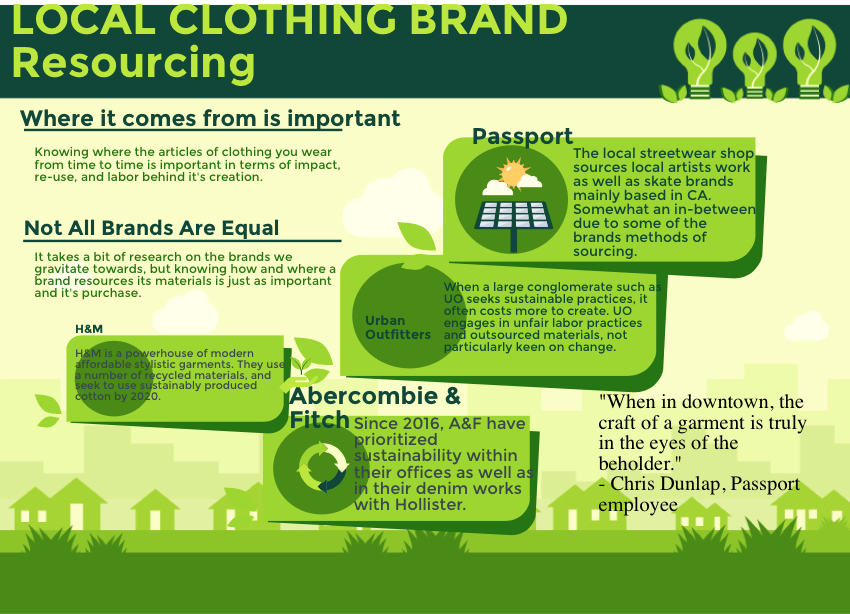 This post is about more than just style! It has to do with the impact clothing can have on the planet as well.

Talking with fourth year journalism major Bailey Snow, finding identity within style does not develop overnight. Taking the time to figure out what kind of outfit captures how one wants to be seen progresses over time.

“Whether it’s plain or strange, finding what to wear starting the day is half challenge half instinct. Knowing what fits you best with what mixes well,” Snow reflects his thought process when getting dressed.

Another, more simplistic but nostalgic would be creations by Imran Potato, who fuses 90’s attire with either bootlegged Gucci print or decorated with retro movie characters/cartoon characters. The clash of the two styles in specific shows an array of counterculture. https://imranpotato.com

King Tuff, in a brief interview prior his Velvet Jones show on his Infinite Smiles tour, explains his journey from uninspired young lad to motivated musician. Understanding that opportunities may not be promising in his home state of Vermont, Tuff trekked to the West Coast without even prior connections.

The albums chronicle King Tuff’s journey not only in essence of his adventures, but also of his mind-frame in dealing with certain self-conflicts; confusion, isolation, subconsciousness. He holds nothing back from his first record, Was Dead, to his most recent work released last year Psycho Star.

Few individuals make impressions that seem to last a lifetime. One journalism major onto the end of his journey to getting his degree is Spenser Judd. As an Oxnard native, he expands on his progression thus far.

In an interview with Judd, I sought to understand the stylistic differences from growing up in Southern California to becoming a student on the Central Coast.

“In high school, I wore shorts almost everyday. The normal get-up, skate/surf tees, up until I began going to punk shows and wearing the clothing sold there,” Judd reminisces. Now the lead singer and guitarist for local band Vibe Out, Judd has undoubtedly elevated his design.

During his sophomore year of college, Spenser Judd applied to the radio station and began his experience as a DJ usually playing psychedelic surf rock or other exotic foreign bands. In terms of style, Judd explains, “mainly contemporary psych rock artists have influenced my fashion, as well as being in the Oxnard punk scene and finding differences from mainstream culture.”

I was fortunate enough to tag along with Spenser Judd to a show at the Madonna Inn seeing Beach House, a dream pop group with shoegaze tones. For those unfamiliar with the music, it is a far stagger from punk. In understanding more music, and absorbing a variety of performances Judd seeks to widen his horizons in delivering shows to audiences as well.

Spenser Judd also diverges from his tradition rock roots, and makes hip hop quite frequently. With a set at Music Production Union’s (MPU) Operation Drip Drop, Judd delivered an upbeat and dynamic set with a range of sounds. Working closely with other members within the Cal Poly club, Judd has opened up the possibility of greater amount of collaborations.

For more information on KCPR: http://kcpr.org/staff/

Entering the central coast, one can expect to find surfers, college students, and plenty of other individuals creating their sense of style.

While some dress with less flair, it is often to pass by another wearing clothing identifiable to a different culture. In this hub of people with strikingly different perspectives in terms of outfit dynamic, San Luis Obispo glows with singularity of one’s identity.

Chris Stamp, interviewed by Complex magazine, explains his departure from his origin, “After I graduated high school I went to college at Cal Poly, in San Luis Obispo. I started my degree in graphic design… it was at that point, that I felt pigeonholed; I didn’t want to be locked into a career where I was designing menus and logos my entire life” (Complex).

Stamp went on to later create his own designs in footwear and different takes on released sneakers. In this case, Stamp embodies characteristics of one’s ambition in their own style to be able to manifest it as a feasible business opportunity.

Stampd, the company founded in Los Angeles in 2011 reflects simple iconic cues from past trends matched with modern and utility design. The ‘avantstreet’ brand pillars their foundation with classic articles of clothing with a touch of futurism.

In terms of contemporary luxury, many on the west coast lack the eloquence Stampd resonates. https://www.stampd.com/pages/about-stampd